Greetings to our many supporters around the UK and the rest of the world. Pass this on to anyone you think might be interested. All previous newsletters can be read at www.fishtailfund.com/newsletters. 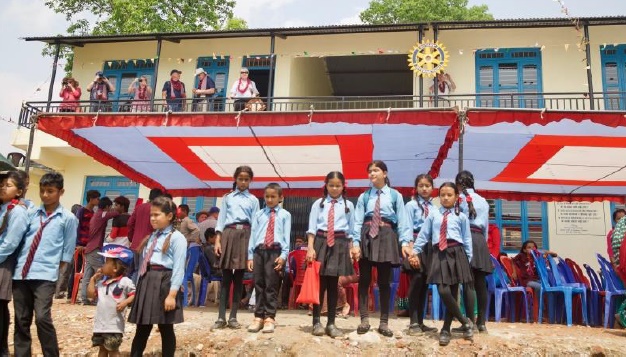 The new school is open at last.

The new school is in the village of Prithvi Rupa, near Pokhara in Nepal. There are eight classrooms, clean toilets for boys and girls (a rarity in Nepal) and a drinking fountain built in memory of Chris Burke, a Head teacher.
The Rotary Club pf Dronfield initiated the fundraising side of the project and was supported by numerous other clubs in District 1220, members of the Dronfield community and several schools including Dronfield Henry Fanshawe School and Dronfield Junior School. Major donors have received an Appreciation from the Rotary Clu b of Pokhara, Nepal. The village community contributed much themselves: the land, the bamboo for the scaffolding, the windows and doors made in the village, and the Village Elders Committee.
Members of the Dronfield Community travelled to Nepal at their own expense to celebrate the school opening. They included members of the Rotary Clubs of Dronfield and Wirksworth, and 21 students and staff of Henry Fanshawe School. A letter of appreciation from the Nepal Rotary Club states:
“Thank you to Dronfield Rotary Club and town as the main international partner to reconstruct a new school building of Prithivi Rupa Secondary School, Nepal. Your financial support and encouragement were the main key fa ctors of this successful Rotary project. Your support was also well recognised by the students, teachers and community of Prithvi Rupa”.
Great recent news: a Global Grant application for the fencing, water supply, desks and other fittings has been approved in full . Thanks to the Rotary Club of Cookham Bridge and Rotarian Derek Smith. 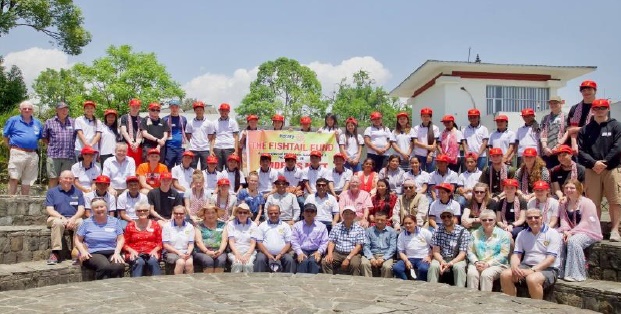 On Saturday 21st April this year, Fishtail Fund students and members of three Rotary Clubs met in Pokhara. Each student was given a group photograph, and an individual one of them receiving their annual support cheque. Many thanks to all supporters. Baseball caps donated by Dronfield Town Council ! 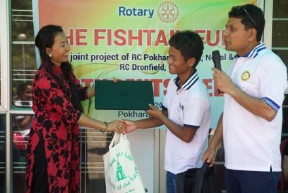 Ashik Pun Magar shows his delight in receiving a laptop to help him in his
aspiration. Four years ago Ashik was helping his family break stones on the
riverbed, to sell to make roads. Spotted by his Head Teacher as very bright, he
has been supported by The Fishtail Fund to the stage where he has completed
a catch-up course to prepare him for university. He is about to seek a place to
train as an Electrical Engineer, supported on the whole course to over £3,000
by the Rotary Club of Bristol Breakfast, UK. Special thanks to Rotarian Colin
Shurrock for his efforts. 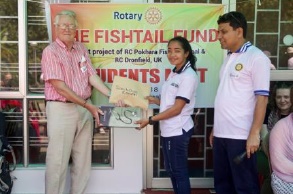 Samikshya Kandel receives an unexpected gift. Samikshya is one year from
completing a six-year course to qualify as a doctor, a wonderful aspiration for a girl of her poor background. She has been supported by a wonderfully supportive and anonymous donor in Dronfield for many years. Now she has a stethoscope, donated by a local doctor who remembers working as a visiting doctor in Nepal during her period of qualification. This arrived with a letter of encouragement from her in the UK. 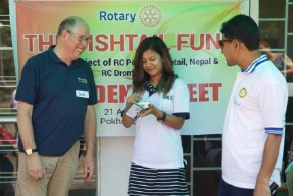 Sanju Thapa has been a Fishtail Fund student since she was twelve. Now she
has completed her course and is a fully-qualified nurse. What’s more she has
a job: as a local government nurse working in Pokhara.
Sanju was surprised to receive a nurse’s watch (which is upside down, to
check the patient’s pulse) from Elaine Minningham of the Rotary Club of
Ilkeston, who was a qualified nurse in a previous life. Thanks!

The Fishtail Fund, organised by members of the Rotary Club of Dronfield, is celebrating ten busy
years supporting poor but clever students in Pokhara, Nepal. If you can support us by a donation or
bequest to our General Fund, please contact us on info@fishtailfund.com.