The Fishtail Fund is very proud of Sangita Devkota. She was one of the first of our students to look for education beyond school, and her great hope was to go to nursing college through the Fishtail Plus programme. Supported by us, she gained a place at the Nursing Campus of Kathmandu University. This college is the oldest nursing college in the capital, established no less than 55 years ago.

It was a great challenge for Sangita to leave home for Kathmandu, ninety miles away from home, by far the greatest distance she’s ever travelled. Last week two of our Trustees in Nepal, Binod Koirala and Laxmi Thapa, visited her at work. They found her homesick but determined. Her patient doesn’t look too impressed!

Elaine Minnigham, currently President of the Rotary Club of Ilkeston, is proudly funding Sangita. Last November she sent over a special nurse’s watch, now Sangita’s proudest possession, which we can see she’s wearing in the ward. She wrote: You are like my angel… I hope you will be helping me in future so that I can build my career as a successful nurse like you.

We are currently inviting support for our Fishtail Plus fund, which exists as backup for the considerable expenses needed to fund post-school courses such as Sangita’s. We currently have just two such students, but next year we will have many more, which will present us with quite a daunting challenge.

Fishtail’s Annual Appraisal day.
Saturday, 10th May has been set for this year’s big day for the Fishtail Fund in Nepal. On that day all our 50 students, their Head Teachers and parents, will be coming along to a get-together. On this day they’ll be writing letters to their supporters, bringing in their grade-sheets and school reports, posing for photographs and telling our Trustees their hopes and plans for the coming year.

Before the day, most students will have received a home visit from our Trustees to confirm that family support is still there, as this is a key aspect of successful progress.

A development this year is that their parent or parents will be offered a free health and dental check, some food plus a small loan. Micro-loans are a very successful way of encouraging poor families to invest in their own futures; typical uses are to buy a cow, or buy and plant seeds. Micro-loans have been wonderfully successful in the Emerging World: more information athttp://www.cmfnepal.org

One we receive the data from Nepal, Trustees in Dronfield UK will of course pass it on to supporters. We very much hope that existing supporters will be able to continue. Anyone unsure about their support dates may contact info@fishtailfund.com for more information. 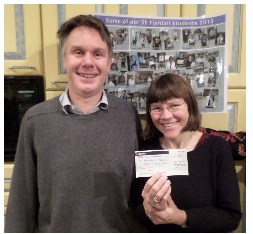 Many thanks to supporters Edmund and Rachel Linfield of Headingley, Leeds. They heard about the Fishtail Fund and decided to support us. They organised a Christmas coffee morning and sale of goods, as a result presenting this cheque to Fishtail Plus. Many thanks indeed.

Fishtail Plus is the fund supporting students beyond school age. Support to age 16 is £60 a year, to 18 £100, but after that costs rise enormously. Any contributions are enormously welcome. 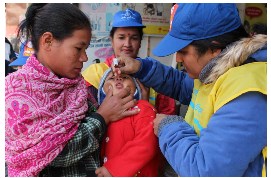 The World Health Organization has declared Nepal polio-free following a six-month period of no reported infections.
As can be seen above, prevention of polio involves a quick and simple process. Nepal conducted 10 rounds of polio campaigns, including two nationwide campaigns in April and May 2010, reaching some 4.5 million under-five children in each campaign. But despite the successes, the risk of further cross-border infections remains, as India (along with Afghanistan, Nigeria, and Pakistan) still has polio – as well as a 1,690km border with Nepal.

In 1988 no less than 125 countries had polio. Rotary International has been a major player in the successful campaign, contributing millions to this great good cause.

New focus for United Kingdom Aid: none for India, more for Nepal
For many years, supporters of the Fishtail Fund have commented about how much UK aid goes to India. It is difficult to find a country with starker contrast than India. It is one of the world leaders in high technologies, the largest importer of high-tech weapons, the country that is seriously planning a trip to Mars, but whose people are mired in poverty, and the officials – in corruption. They point to newspaper reports such as this from 2013:

India sends a spaceship to Mars after UK gives £280million in aid
India launched its first Mars-bound spacecraft today at a cost of £45million – while the UK still gives the country more than six times that figure in aid each year. The Asian country, which has widespread poverty, has spent more than £600million in total on its space programme. Last year India’s then finance minister Pranab Mukherjee said UK aid was “a peanut in our total development expenditure”.

The situation has changed. In late 2014 the UK Government pledged to stop giving aid to India. However aid to Nepal stays the same. It is equivalent to about two pounds per Nepali citizen per year.