Newsletter 20 – April 2015
The Fishtail Fund: hard work at the other end 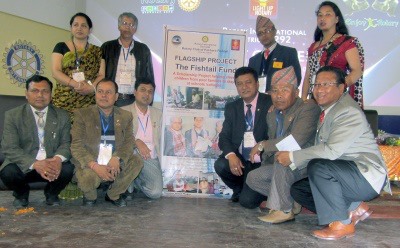 Readers will understand that raising funds in Europe is only the start of the Fishtail Fund process. Once the money arrives in Nepal, it must be prudently and securely passed on our students.

Central to this process are the hardworking Rotarian Trustees based in Pokhara. Our photograph above shows them at their District Conference (Nepal is very proud of now being its own district, separated at last from big brother India). The Fund was selected as a Flagship Project at the Conference and given high status. We hope to see at least some Trustees in Derbyshire in October 2015.

The Fishtail Fund is one of several major projects supported by the club. They are also involved with bringing water to remote villages, literacy and IT. Among their successes is a link with a Harrogate club: http://www.rotaryharrogatebrigantes.org.uk/projects/nepal-project.

We rely totally on our Pokhara Trustees to make the Fund work. Thank you!

Sample Nepali cuisine at its best: without leaving the UK!

As a supporter, we’d like to invite you to try an authentic Nepali meal with us. We’re meeting at the Kathmandu Gurkha Restaurant in Clay Cross at 7 pm. The date is Monday 20th April.

The restaurant is operated by ex-Gurkhas and was a finalist in the Chesterfield Food and Drink Awards 2013. The cost of £15.95 each includes a small margin which will go to the Fund. You’ll be made to feel at home, and we will be taking the opportunity to show you some images of Nepal, Pokhara and the project itself. There is a choice of spicy and non-spicy food; for those in the know there will be daal bat (rice and chutney trays) and a big range of succulent food not usually on their menu.

At the time of writing a limited number of places are still available.

It seems that Nepal is never far from political unrest. In a previous election, the Maoists gained power, proceeded to abuse it, showed themselves incapable of leading the country and engineered a political crisis. In the subsequent election they lost heavily, as the ordinary people had realised the paucity of their agenda to improve things.

Now they have disrupted the process towards a constitution (there has been no constitution for years) and when opposed fell to vandalising and throwing chairs and microphones in the parliament building. The only international airport was closed for four days, interrupting the vital flow of tourists who underpin the economy. We hear from a Rotarian in Pokhara:

Next they have called general strikes countrywide. Markets, schools and other businesses are closed and transportation halted here. I just heard at least 5 vehicles vandalized in Pokhara by agitators. General people are much disappointed with their act.

Remarkably, most people there simply get on with their lives. Rotary Clubs are a stabilising and uncorrupt force for good. It seems most Nepalis cope without the help of competent politicians: it makes us in the United Kingdom, ourselves in the throes of our election campaign, seem to live in a paradise by comparison. It reinforces our need to get support through without the interference of corruption and backhanders.

We do hope that at least some of our bright young students may in years to come, understand and support the process towards a secure and progressive democracy in their land.

In April every year we send several thousand pounds of supporters’ cash over to Nepal. In Pokhara our students are called together for their annual appraisal. We check their progress reports and exam results; we take photographs and request personal letters for their supporters. Sometimes we help them with clothing or equipment such as t-shirts (above) or school bags. In this way we try to keep our supporters up to date with the prudent use of their money.