Newsletter 18 – November 2014
Best wishes to all our supporters in Britain and Nepal.

Website updated
We have now received updates on all our students: their exam results, changes in family circumstances and so on. These updates have been sent to all supporters, and soon can also be read on http://www.fishtailfund.com/ourstudents.htm.

Unfortunately we lost three students this year. Two are economic migrants with their families moving away from Pokhara in search of work, taking their children with them. A third, Bibek Thapa, simply disappeared in spite of our Trustees’ best efforts to locate him. Three bright new young students, with excellent potential, have replaced them.

Twins!
What is the genetic probability of producing twins? Much depends on circumstances, but in our case we have two sets of twins among our students. Studying together in Fishtail Plus are Ganga and Jamana Gurung (holding their support cheques) who have been with us since the beginning; in addition Mani and Shiva Tilija (below right with family) who are 14.

Jamana’s academic strength is in English, Ganga’s in Economics. Both are studying Management in the Sixth Form. Shiva (centre) has suffered with leg problems which his sponsor paid to have treated.

Support from Rotary clubs
Other clubs are particularly supportive of the Fishtail Fund. No less than seven clubs sponsor a total of eleven students; in addition 20 individual Rotarians give support. Thank you to all of them. 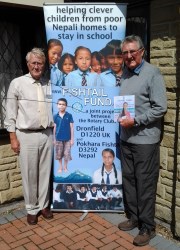 Among our supporters are members of the Rotary Club of Helderburg, South Africa who have supported Sandhya Silwal since she became a Fishtail student. A club member, Ron Vader, visited Dronfield recently so through him we were able to thank his club personally.

Postman to Pokhara
An opportunity has appeared for us to send letters to Nepal. The postal system there is unfortunately highly unpredictable, and in the past letters have been opened in a search for cash. A member of the Rotary Club of Bristol, Tim Mitchell, plans a trip there in December to help in the opening of a well. He’s agreed to take our letters. All sponsors have been contacted by email.

Micro-Loans
A number of the families of our Fishtail Fund students have been given these loans this year. The loans are a small amount of cash which must be returned plus a small amount of interest in a specified time. The funding is entirely separate from Fishtail Fund funds of course. Typical uses are to buy seeds to grow vegetables to sell, or purchase of a cow to sell milk.

Small loans give hardworking entrepreneurs the chance to own their own businesses, earn their own income, stimulate their local economy, and become respected members of their communities. See how stories of struggle became stories of success with the help of a small loan from World Vision: http://www.worldvisionmicro.org/success_stories/1?lpos=mid_txt_LearnMore_SuccessStories.

We look forward to hearing how our families progress. Almost always, the loans are repaid promptly and put to excellent use.

A recent UK government report* warned that much UK money given to the Emerging World is lost through corruption: it used as examples Nigeria and Nepal. Here are some of their points:

Giving money is at its best when the experience of local staff is harnessed. However in Nepal local representative bodies remain subject to political capture. Political elites are often able to use their status to influence the direction of government funds towards their preferred projects. we were told by stakeholders that the Ministry of Federal Affairs and Local Development, which is responsible for community projects in regional areas, is one of the ministries in Nepal most afflicted by corruption through some of its staff.

The Fishtail Fund model tries to avoid this loss. We cut out all layers of bureaucracy and send direct to our sister Rotary Club, and our Trustees place cash direct to the families and headteachers. By this means we try to sideline all the intermediaries who might hope to divert cash distributed by agencies.

Our Facebook pages can be reached from the Home page of the Fishtail website. In them are lots of images, stories and chat. You do not need to register or even ‘like’ a story if doing this concerns you: just read and enjoy.