Newsletter 17 – July 2014
Best wishes to all our supporters in Britain and Nepal.
Previous editions can be read on www.fishtailfund.com/newsletters.

A second student nurse has our support
Sanju Thapa is 16. She has been a Fishtail student for four years and her progress has been exemplary.
Sanju lives in very poor conditions, in a single room with her brother, sister, mother and sick father. Her head teacher recommended her to us in 2010. Since then she has been astonishingly single-minded: virtually 100% attendance, almost always top of her class, especially good at sciences (90% in Health!) with a long wish to study medicine. 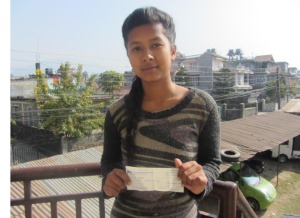 Now Sanju has passed the nursing qualification for the University of Tribhuwan and has been offered a place at nursing college in Birgunj, a town near the Indian border. Most state-school students never even get near this chance in Nepal. Our Trustees in Pokhara support her hopes, and feel sure that she and they can stay in touch since we will help her visit her home in Pokhara regularly.

Her sponsors throughout have been Gary and Tracy Ashley, and in a wonderful gesture they have agreed to fund her at college. We are very grateful for their generosity and we know Sanju will be absolutely delighted. Regular readers will know she is our second nursing student, following Sangita Devkota.

Annual appraisal day
Every year our Trustees in Pokhara bring together all the Fishtail Fund students. They bring details up to date: personal family situation, exam results, school reports, aspirations. This year’s get-together is complete. Those of our readers who are sponsors can expect the updates on students in the next few weeks.

More support for Fishtail Plus
We are building up a fund – Fishtail Plus – to support those students who might be capable of going on to University, College or any vocational education. These courses are of course much more expensive than school, where the Government provides support. Grants are sometimes available, but the costs can range from £20,000 for a medical degree in a private college, to nursing qualifications at state college (£2000) or private college (£4000). Vocational skills courses for plumbing and similar will cost considerably less. 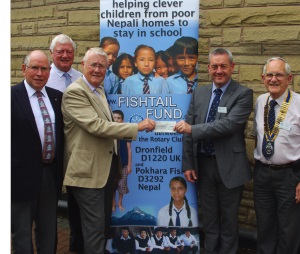 Although some sponsors are willing and able to continue support after 16 or 18, it is likely that extra funding sometimes will be needed. We are therefore enormously grateful for their support to Trevor and Jan Kippax, also to St James’s Place Wealth Management, who have both recently contributed to the Fishtail Plus fund.

Derbyshire cyclists reach Pokhara
Action4Asia is a group of postgraduates sponsored by the Rotary Clubs of Bakewell and Wirksworth, who set out to cycle across Asia to publicise Rotary charities, including Aquabox and the Fishtail Fund. Their full story can be followed on www.action4asia.org. After a send-off by their patron the Duke of Devonshire, they covered no less than 9000 miles in 203 punishing days. 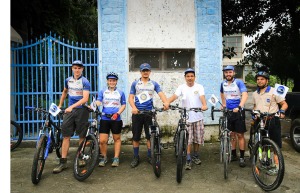 David Cook, founder, director and lead cyclist, described their arrival in Pokhara, the operations base for the Fishtail Fund. We were greeted by the Rotarians of Pokhara, who had invited their friends, families, respective cycling clubs (such as Cycle City Pokhara with whom we went for an epic mountain bike trip), and their partners to join the Action4Asia team for a cycle ride around the city of Pokhara. As we crawled behind a jeep carrying a gigantic soundsystem, the general public were, we think, told of our heroic exploits and that of the Nepali Rotarians. After this we were given white scarves, a thousand pictures, 412 handshakes and breakfast. I for one was fairly taken aback by the warmth of this welcome….

Dave hopes to present a talk on their trip to the Rotary Club of Dronfield, UK home of the Fishtail Fund. If you would like us to tell you when the talk is arranged (almost certainly on a Tuesday evening) please let us know on info@fishtailfund.com.