Best wishes to all our supporters in Britain and Nepal. Enjoy Christmas and have a Happy 2014.

In a magnificent effort, both Alison Sykes and her daughter Rowena White (Friends of the Fishtail Fund) made it on their sponsored climb. They reached Annapurna Base Camp on November 23rd, at a height of 13,500 feet. The climb included 22,000′ of uphill and downhill in each direction, with altitude slowing them down. They attracted pledges of over £3,000.

The funds will go to support our older students when they go to college.

Success in Nepal 2
We are delighted that both our ‘flagship’ Higher Education students have now gained places in Further Education – in spite of the General Election in Nepal.

Sangita Devkota starts her nursing course in Pokhara this month, with course fees supported by Elaine Minningham of the Rotary Club of Ilkeston, Derbyshire, UK. Alison found Sangita looking forward to the course and supported by a delighted family. Her father Khim Lal Devkota is enormously proud of her. His income comes from cleaning toilets in India, so to allow his daughter to stay in college is a wonderful gesture of support. Elaine (herself a former nurse) sent Sangita a ‘real’ nurses’ watch with which to start the course. Sangita has as you can see also been presented with a certificate requiring her to undertake several obligations in return for our support:
Do your best and work hard
Pass every examination with a good mark
Write to your sponsor at least twice a year
Stay and work in Nepal for at least three years after you qualify

If you do this we will try to support you until you leave college. 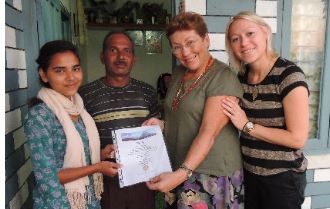 Gandira Thapa Magar finally obtained her place at the University of Pokhara’s Department of Engineering, after the sitting of her entrance examination was delayed by the General Election. She was offered a choice of Computer or Civil Engineering, and chose the latter; more excitingly, she has been awarded a scholarship. This means that the Rotary Club of Hope Valley, who are supporting her, will find their cash going further, possibly to cover books and exam fees. Gandira is pictured above with her parents, Alison Sykes and (left) Binod Koirala, who does so much to coordinate the Fishtail Fund’s efforts in Pokhara. Thank you, Binod! Gandira has a certificate similar to Sangita’s.

3 Our future superstars?
Encouraged by our college successes above, and not too discouraged by the sad story which follows below, we show you the faces of the seven hopefuls who may soon need support at College or university.

Their seven backers have supported them through school and all have rewarded our confidence with good exam results. We are hoping to build up our College Fund, because Higher Education is expensive (perhaps around £1000 a year) and many supporters will have to think hard before undertaking support at such a high level. This is where the College Fund will help.

4 Sadness in Nepal: sold as a wife

We regret that Samjhana Tamang has left the Fund under difficult circumstances.

Samjhana is now 17 years old and was one of our high-fliers, certain of a college place we believed. She is a high achiever with grades around 75% and 100%. In 2011 she sat her school certificate: with a SLC grade of 70% she gained a magnificent First Division pass, an exceptional achievement for a pupil from a state school.

As a result one of the Fishtail Trustees, next year’s Club President, who runs a private school Step by Step, awarded her a place in his Sixth Form / College studying management. Fishtail supporters Caroline and Richard Hurt covered her other costs.

Update, December 2013: Samjhana is from a very poor family, without a father and living somewhat under duress with a step-father. Children relying on relatives are in insecure circumstances sometimes in Nepal, and so it has proved. When two UK Trustees visited her in February her stepfather refused to talk to us and Samjhana was visibly uncomfortable. We now hear that she has been taken out of school and into a different area, and has been married off by her stepfather. It is likely that he gained money from this arrangement. Trustees have tried to trace her with an offer that she finishes the school year, but they report it is unlikely she will return to school.

We very much regret this sad end to a potentially blossoming career. This is only our third student loss since the Fund began

5 Politics in Pokhara
Although they got in the way of the college exams, the elections have resulted in an encouraging situation. The Maoist Party, winners of the previous election and a generally negative and dissident force in the country, have been defeated and the Government will be a coalition (how we understand that in the UK!) between Congress and Marxist-Leninist parties. Our Nepal Trustees are positive about the result. All Nepal needs now is a few years of stable, democratic government without too much conspicuous corruption.